Eventually as an operator you will be called upon to excavate in an area that has very wet unstable ground. 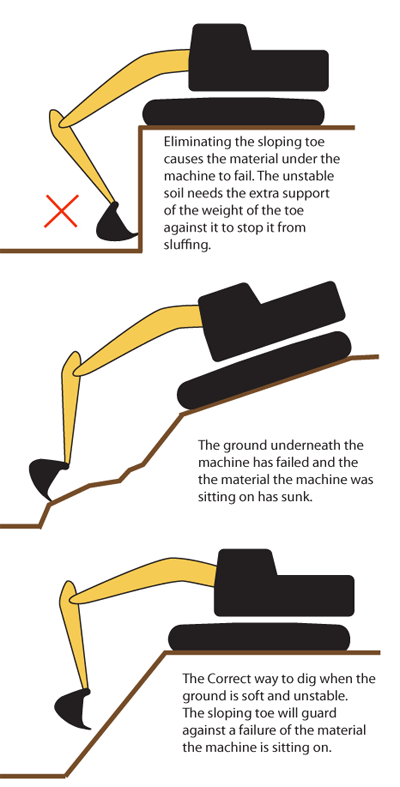 Any situation can be managed if the correct techniques are used.  Early in my operating career I was hired by a contractor to do an excavation for a house in very soft unstable ground. The lot was in an established neighborhood with a back alley access. It was evident after the first scoop that this was not going to be a routine excavation. The soil conditions consisted of about a half meter of topsoil followed by about a meter and a half of peat and then a very wet grey clay. As the machine moved I could see subtle waves moving out and away from the machine. The tremors were made even more obvious by the movement of the clothes line poles in the adjacent yards.

I started digging and promptly got into trouble when the material the machine was sitting on collapsed. The toe at the base of the face basically blew out suddenly and the machine that was level was now at a 45 degree angle. Luckily I was able to back up and out of the hole and get things fixed up. It just as easily could have gone the other way though and I could have ended up stuck. To keep the ground underneath the machine from failing a slope or toe had to be maintained as I dug. The sloping toe was enough to shore up the soft ground under the machine and stop it from blowing out.

Later on in my operating career I had to use this technique again and was especially glad I had the prior experience when I had to dig in a tidal bay a couple hundred yards out from shore. I had to prep for a future marina, apparently the dredger that would come after I finished was not able to do an edge cut. My job was to work my way along and dig a trench as deep as I could about 10 feet wide and pile the material where the marina would eventually be. As low tide approached I would travel out into the bay in the Hitachi EX200 I was running at the time.  The ground was very soft and I used log mats to track on.  The mats were logs cabled together and were roughly the size of the tracks of the machine. I would work my way out into the bay by tracking onto one of them and then turn around and pick the other up and place it in front of the machine and then track onto it, repeating the process until I got to where I had left off the day previous.

When the tide was at its lowest the machine was a couple of feet above the water. Initially the spoil pile was out of the water but all of the digging was in the water, it was done by feel alone. Eventually the tide would start to rise and I had to track back to shore. I finished the job without incident and I was grateful for the previous knowledge of maintaining the toe of the slope to avoid the failure of the unstable soil underneath the machine. In this case with the rising tide a soil failure resulting in the machine getting stuck would most likely have resulted in the loss of the machine itself. Needless to say I was glad when the job was completed.